Li Zhi Bing receives us at his home in the Beijing district of Song Zhuang, according to him, the actual art district of the city “798 is a place to sell art derivatives”, sentences. We got there after a 7900 kilometer trip magically transformed in just a few seconds thanks to the internet. We will be using WeChat to carry out this interview. Li seems curious about how all this will work and so are we. Let’s start!

798 is a place to sell art derivatives

Li is a young Henanese artist born in Anyang in 1983. He portrays bits of rural China and Chinese minorities in realistic-style oil paintings. Li was the first prize of his promotion in the Central Academy of Fine Arts of Beijing in the year 2007. In the last years he has exhibited in the Wu Guanzhong Museum of Art in Yixing, Jiangsu, and in the Dafen art Museum of Shenzhen. He is currently working on another painting to present to the Sixth National Youth Art Exhibition that will take place in July 2018. He combines his job as an artist with teaching.

At first glance, his paintings transmit a photographic feeling that, however, it is not real “I use the camera to shoot the inspiring materials but after that there is a creative process where my memories and intentions are reflected”. The simplicity of the motifs as well as the multiple details with which the people and places are portrayed are testimony of that.

Realism. I am fascinated by the work of the Great Master Rembrandt

If you ask him about his artwork, he will define it as “Realism. I am fascinated by the work of the Great Master Rembrandt”. Other of his referents are Repin and the Chinese Qi Baishi. The choice of realism as an expression is deliberate:  he likes this painting style. Even if still realistic, Li has also other artworks that are not as figurative. One example may be the one following this words: 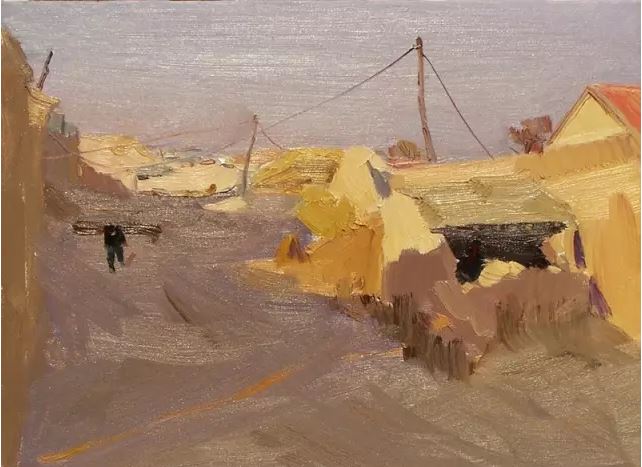 Speaking about the subjects of the paintings, there is a concern for the heritage of the countryside: “It is the context where I come from and it deserves to be treated in my work. In addition, rural areas have experienced the greatest change in the lasts years because of social progress. My work is a kind of nostalgia, a humanistic concern for the countryside”.

Nevertheless, if you question him about the loss of heritage in China due to those changes, he believes that minorities and rural areas are not endangered “Modern civilization will have a certain impact on traditional culture, this is a global issue. However, I believe that ethnic cultures will become more and more precious, but they will not disappear. China is increasing its attention to the protection of its national culture”.

What is your masterpiece?

It may be this. It portrays in real scale an elderly couple in a rural area in China. Actually, they are my grandparents.

Let’s talk about Beijing, because, even if Li comes from Henan he lives in the Capital of the North. Are you interested in Beijing as a topic for your artworks? “Beijing is just the place to live and work now. I live here but I am always concerned about the countryside”. And how is it living and being an artist there? “It is like in most of the big cities, high consumption and expensive rents. Artists must spend more money to pay a house or a studio but at the same time you can find many opportunities. Me, for example, I paint in my living room. Only famous artists can afford a great studio here”. Actually, he is fortunate for living in his current district, Song Zhuang, the real art district of Beijing which he considers his oasis in the big city. An important artistic hotspot in the city? “That is the Chinese art museum. I often go there to visit its exhibitions”.

China is a great place to enjoy many kinds of food

We can’t end the interview without asking for the most important immaterial heritage: food. “Inspiration has nothing to do with food. –he jokes when we ask him about which dish inspires him– My favorite food are jianbing guozi [this is a Chinese crepe filled with many sauces and other fillings typically eaten for breakfast] and my favorite place for lunch is Grandma’s (外婆家), close to Wangfujing. China is a great place to enjoy many kinds of food”. There is no need of saying that!

Special thanks to Qianling, her twin sister Qianli, Huanqing Wang and Li, without which this interview would not have come true.